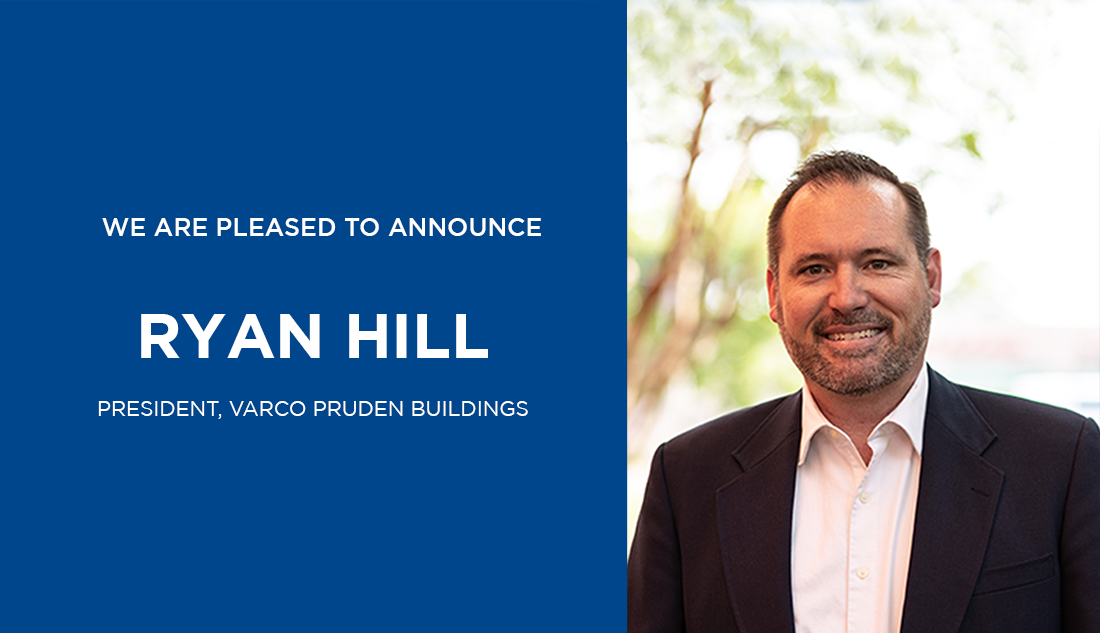 After two-and-a-half years leading Varco Pruden, current president Paul Day, will be returning home to Australia at the end of May. BlueScope Buildings COO, Greg Pasley, has announced Ryan Hill as the new president.

Paul, who has led the Varco Pruden brand since October 2018, will be leaving his position at VP to return home to Australia. Among many other accomplishments, he is credited with building a strong culture of employee engagement and was instrumental in leading the Varco Pruden team through the many challenges of the COVID-19 pandemic.

“Paul brought a new perspective to the Varco Pruden organization and really drove not only exceptional growth, but he has been a strong ambassador for BlueScope and significantly strengthened the relationships between BlueScope, BlueScope Buildings, and Varco Pruden,” said Pasley.

Paul has been a valuable member of the BlueScope Buildings senior leadership team and has made a positive influence on the Varco Pruden business, employees, and formed strong connections with many of the VP Builders.

“I have had incredible support and felt extremely welcomed from day one to today. The respect that the entire Varco Pruden and BlueScope Buildings team has for one another and the professional and considerate approach to work is better than anything I’ve experienced in any other role,” said Paul about his time here in the United States. “This organization sticks together in even the most trying of circumstances and it never loses sight of the Builder’s interests, which is why it has been successful for so long.”

Paul, his wife and their four children, will re-settle back into life in Australia starting at the end of May, but he will be helping newly appointed president, Ryan Hill, during the transition. After that transition time is up, Paul will take on a new role within the BlueScope organization.

“I’m so grateful for this tremendous opportunity with Varco Pruden. I have a strong passion for fostering Builder relationships and ensuring our Builders succeed, which is why I am excited to start this new journey with VP and our incredible Builders,” said Hill.

“Ryan brings to the table phenomenal engineering experience that will benefit the VP Builder and VP employees tremendously. He knows the business and the industry very well and will use that experience to help navigate the brand forward,” Pasley said.

Ryan is a licensed Professional Engineer and received a Master of Business Administration degree from Union University and a Bachelor of Science degree in Civil Engineering from Tennessee Technological University. Ryan has a strong history of forging connections across the business and with our Builders. He is a recognized leader and well prepared to fill the strategic role of President, Varco Pruden Buildings.

Ryan’s first official day in his new role is May 10, 2021. His previous role as Regional Builder Services Manager will be filled as quickly as possible.

BlueScope Buildings wishes Paul and his family a safe return trip home and the best of luck in Paul’s new role at BlueScope in Australia.